Do Solar Panels Work in the Winter? 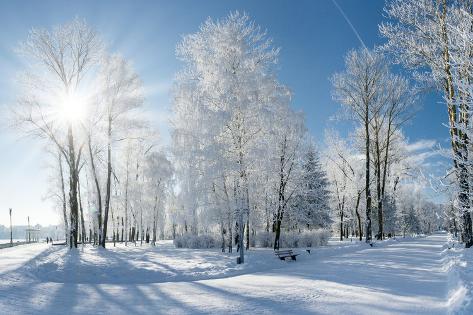 When we think about solar power, most of us probably assume that the most effective season to use solar power is during the summer. However, the ideal season for solar power and solar panels is actually during the winter season. The cold temperatures throughout the winter months provide the ideal solar panel output. This is due to a number of factors, (which we will discuss later on), with one notably being that the white snow during winter can reflect light and assist with solar panel performance. But if snow covers the solar panels, then they cannot do their job as efficiently. Remember: snow on solar panels means less solar energy for you!

Another solar power myth is that states with very sunny weather (here’s looking at you California and Arizona), are the only places where solar power will work the best. As stated below, states and regions that experience cold winters should not be deterred from installing solar panels and reaping the benefits of solar power! According to The Solar Energy Industries Association (SEIA), the top 10 states in the U.S. for solar include Massachusetts, New Jersey, and New York for the highest amount of installed solar power technology in 2017. They also stated that a large percentage of solar installations in these states occurred during wintertime. This is most likely due to the fact that electricity prices are a huge proponent of solar savings. When it’s winter and your heating bill keeps skyrocketing, going solar will save you money.

Temperature and Solar Farms: The Impacts of Winter

Winter weather brings shorter daylight hours and forecasts of cloudy skies, and yet solar panels are still able to produce solar energy. Why is that? Solar cells (also known as photovoltaic or PV cells) convert sunlight into electricity. Since solar cells convert sunlight into electricity, they do not depend on temperature as a factor in energy production. A common misconception is that the sun’s heat is necessary for solar power, when in fact solar power is derived directly from sunlight.

If you think about it, colder temperatures may produce a more efficient performance output from solar cells. Think of solar cells as an avid outdoorsman who loves to exercise outside. Pretend he is running outside on a particularly hot day and returns home sweaty and dehydrated. Now pretend that he is running on a crisp, chilly day with cooler pavement beneath him. His run is less sweaty and more pleasant. You can even conclude that he had a more efficient workout on a cooler day than on a hot one. Solar panels are similar to this scenario. Solar panels will not perform optimally if the temperature is too hot. Cooler temperatures and brilliant sunlight are the ideal conditions for peak solar panel performance. Winter weather encourages module efficiency, meaning that the conversion process of sunlight to energy is more competent with colder weather.

As mentioned in the beginning of this article, snow has a positive impact on solar power. This is due to the snow’s reflection of sunlight back to the solar panels and producing better solar PV outputs. Just beware of allowing snow to accumulate on solar panels as they will not produce energy. Getting snow off of solar panels should also be done without scraping or raking the snow off. That would really cause damage to your panels! An easy way to get solar panels snow-free is to hose the snow off. You can also research companies in your area that have resources to clean off the snow for you. A well-prepared crew will have safety ropes and the necessary equipment to clean off the snow in a safe manner. Some solar installation companies, such as NRG Community Solar, will even provide solar panel maintenance free of charge. Also, do not worry about heavy snowfall having an impact on your solar panels. Solar panels are built to withstand snowfalls and freezing temperatures.

An International Perspective of Solar Power Output in the Winter

If you still are not sure that the winter season is a prime time for solar power, consider Germany’s rise in solar panel installations. This northern European county has sunshine levels that are similar to Alaska’s and has been a world leader in utilizing solar panels as a solution to energy. Germany is a successful example for the U.S. to follow because Germany’s wintery climate proves that solar energy works very well in cold weather. From an international perspective, solar panel performance and snow positively go hand in hand.

Homeowner Benefits of Solar Power in the Winter

More and more homeowners across the country are looking towards solar energy as a way to save money and to also help the environment. A key fact to know when shopping for solar energy systems is that winter is the best time for homeowners to go solar.

One reason is that the wintertime is a slow season for the solar industry and companies will offer you a better deal than if you wanted to install in the summer. Summer is such a busy time that solar panel installers do not need to worry about running installation deals. However, it’s a completely different story once winter hits. If you are comparing your installation options on EnergySage Solar Marketplace, then you will receive competitive quotes from installers because fewer homeowners are shopping during the chilly weather. Additionally, if you shop during the slow season, then you will find an installer with more time to devote to your solar project. Just imagine how much money you will save by buying the solar panels in the winter, and you’ll also be receiving the governmental solar panel installation tax credits on top of that!

Another benefit is one mentioned in this article above: solar panels are highly efficient in the winter. You are guaranteed a high amount of electricity from your solar panels during the wintertime.  Most homeowners assume the hot summer is more ideal for installation, when winter is also a prime time for solar power. Not to mention, solar PV panels are more efficient in the winter. Now is the time to save money on your heating bill!

A third benefit is that acting fast guarantees you a good quote from a solar installer. Waiting until spring may cause a few financial incentives to disappear. Since solar energy is becoming more popular, utility companies and municipalities are reducing their solar incentive programs. For example, some utility companies are changing how they compensate homeowners for excess solar power during the summertime. If you install a solar energy system in the winter, you will get a head start on solar energy deals and incentives before they are reduced during the warmer months.

Also, keep in mind that solar panel installation is not instantaneous. Most solar panel projects last from three to six months. The process is lengthy because it includes the time to check the panels and see how they are running. If you wait until the summertime to start the project, then potentially you could not have solar panels installed until the end of the year. Waiting until the winter will get you the best deal and your solar panels may be installed between the end of the year or the beginning of spring the following year. Another thing to keep in mind is that installers prefer to work over the winter months because they have more comfortable temperatures to be outside in. They would take a chilly winter day over a scorching hot one anytime!

Cold weather should encourage you as a homeowner to go solar. Also, if you live in a state that frequently has white Christmases, then remember that snow is a friend to solar panels. Your solar power output will be at peak performance for your home during the wintertime! Solar panels are an investment and will generate plenty of returns on your energy bill at any time during the year.

Final Considerations for Solar Power in the Winter

While sunny states such as Arizona and California are seeing rises in solar panel installation, it does not mean that only warm states will reap the benefits of solar energy. Solar panel installations can happen anywhere in the U.S. Also, even if you live in a northern state where winters are cold and cloudy, the worst of winter usually lasts only three months. After that the longer days of summertime will make up for what you lost during the colder months.

Solar panel snow problems are very mild in terms of upkeep and maintenance issues. A few final considerations you should have in the back of your mind when worrying about winter weather and the impacts of colder temperatures on your solar panels are as follows: